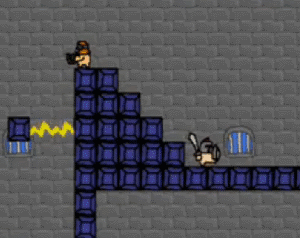 I’m often asked by parents why kids should learn video game design – after all, they have to learn so many things, math, sciences, engineering, so why is game design important?

The first answer that comes to mind is that it’s a gateway to get kids interested in technology and computer in something they already love doing. Games involve the entire spectrum of technology – from digital graphics design, programming, sound engineering, art, storyboarding, promotion, marketing, and research. Before a single line of code can be written, or a pen put to a tablet, a game designer has to think about what kind of game they’re building? What platform do they want their game to be on? What art style do they want? Do they want a console game, a PC game, or a mobile game? What kind of story do they want for their players? What kind of controls for their game should there be? What kind of gameplay do they want?

For example, a platform game can be built without much of a story – there can simply be a series of levels where the player successfully completes courses. For mobile games, this might be a decent fit, because mobile games usually can’t incorporate too much of a story. The flip side of this, would be that a platform game on a mobile device must feature some form of touch controls in order to keep it engaging and fun. Furthermore, the game designer must utilize their screen size carefully due to the small size of the device.

On the other hand, designing for a console could feature a more complex story, and allow for more complex actions due to the larger number of controls on the game controller. However, you have to constantly keep up with modern technology – the Playstation 4 and Xbox One are new consoles that developers are just starting to get used to.

So any enterprising game designer has a lot to think about and plan for before beginning their game. So when kids are learning video game design, they are exposed to a wide variety of technologies available, and learn to understand what differentiates them. They are also learning about what makes existing games fun and popular, and how to create a game that’s profitable. For our 2014 summer camps, we have multiple video game design camps to choose from, from Adventures in Game Design: Platform Games, where kids are introduced to game design as a process, and the skills required to design a game. In the iPhone App Design camp, students take their skills a notch up by building a game for their mobile devices and tablets, learning about the unique intricacies of new platforms. For more advanced campers, we have 3D Game Design with Maya and Unreal Engine 4, which introduces students to 3D game design, and the brand new (and amazing) Unreal Engine 4 – a personal favorite of mine. The Unreal Engine 4 can create amazing games on par with AAA studios, including top notch first person shooters, role playing games, and action-adventure games such as the Zelda series.